This is no ordinary Farr 30 - she is 250kgs lighter, has an outboard engine (lighter, less drag), 2.2m bowsprit, 34% bigger spinnaker, plus numerous tuning/tweaking fixes that really work.

Pegasus is a safe, delightful boat to sail, like a big dinghy with a total crew of 6. She now planes in less than 15kts TWS but can sail as deep as a symmetrical Farr 30 and faster. Same upwind except faster in very light conditions - e.g. 4.4kts in 4kts TWS!

She is fantastically successful racing against good opposition in the Solent - in all conditions in HP30. In open IRC racing she’s especially good in very light (<6kts) and very windy (15-30kts).

Over 2 seasons (2018/19) Pegasus won 75% of all races, plus numerous 2nd and 3rd places. The boat won its class (either IRC 2 or 3) several seasons in the Royal Southern Summer Series, and was on the podium in Hamble Big Boats and Winter Series. 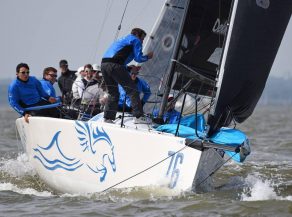