Cowes Week Round Up

CONGRATULATIONS TO PEGASUS, WINNERS OF THE HP30 AND SPORTSBOAT DIVISION 1 CLASS, AT COWES WEEK ONBOARD THEIR FARR30 PEGASUS.

Malcolm Wootton and his crew posted bullets for virtually every race , winning on corrected time by some considerable margin.

This newly formed sailing team has evolved quickly and is sailing the boat consistently well, going into day seven of this eight day regatta, with the overall win already sewn up and it was with finesse that they won yet another race on corrected time.

The nineteen year old Farr30, has been adapted to fit into the HP30 and Sportsboat Class categories, having a new centre-line bowsprit fitted and reshaping the sails for maximum IRC benefit.  From a winning perspective, the results are plain to see and will no doubt drive interest in further modified boats joining the fleet.

Most exciting of all, for both the HP30 Class, the performance of these boats at Cowes Week, has resulted in huge interest from owners looking to join this programme.  As well as new boats joining for 2017, two American teams have also expressed interest in coming to race out of Cowes in 2017.

With these boats racing in both HP30 and Farr280 specific events, high performance racing in the 30’ category is set to become increasingly popular, particularly as later in the year, the Italian, Swiss and German Farr280s will also come and join the fun, racing together in the Round the Island Race and Cowes Week, where the HP30 Class will have its own start 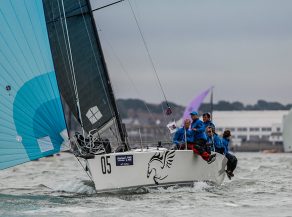