With eight high performance race boats, coming to Lendy Cowes Week, the HP30 Class continues to grow. Over the course of the last two events, the fleet has been joined by the Swiss Farr280, Team Buzz and next week, Hans Genthe’s German Farr280 returns to Cowes for their third year, completing the complement of light displacement boats.

As well as the five Farr280s racing, the fleet includes Richard Woof’s J90 (winner of the HP30 Class in the Round the Island Race), Malcolm Wootton’s Farr30 Evo Pegasus (current HP30 Class National Champion) and Mikhail Tokarczyk's FarEast28 Mittens Revenge (making their season debut).  The balance of the fleet is made up of Farr280s, TOUCAN, Pandemonium and MOFO (formerly FOMO).

With racing for the week, divided into two parts; multiple racing on the first four days, followed by classic Lendy Cowes Week starts and finishes from Wednesday through Saturday, there will undoubtedly be plenty of podium places and lead changes throughout the week.  Toucan will be looking to clip Pegasus’s wings and as they have recently found substantially more speed and ended the Royal Southern July Regatta on equal points with the Farr30, they will start the event confident that they can win.  That said, Jo90 will also be in boisterous form and arguably, the varied courses and tactics required for a week of tidal racing at Cowes Week, will be a tasty prospect for Woofy and his crew.  Having said that, the event is wide open and any well sailed and navigated boat could be in the money.

As well as the exciting racing at the event, on the first Saturday (4th August) after racing, all of the boats will be on display at Shepard’s Wharf Marina, with “Rum on the Dock”, for the crews and for teams interested in joining the fleet.  Some of the boats have recently been optimised for the rule, so this is an opportunity for everyone to have a closer look at how the boats are setup.

For teams interested in joining the class for 2019, this is also an opportunity to meet the crews and exchange ideas for the future.  With more owners committed to send their boats boats to Cowes in September this year, with a view to competing in a full 2019 circuit and with such a huge choice of class compliant boats available, the future of the HP30 Class is very exciting.

Remember, every journey starts with a "Rum on the Dock”.  Please let us know if you intend to join by emailing secretary@hp30class.com 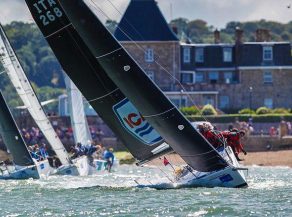