This weekend saw the start of the HP 30 Class Series, at the Royal Ocean Racing Club's Vice Admiral's Cup in Cowes.

The fleet comprising of six owners boat's, showed off their moves and reinforced the rationale of providing fast, high performance racing on a separate track to slower displacement IRC boats, which share the same rating bands. The result was an eight race series, with five out of the six boats achieving podium spots over the three days. A huge thank you must go to the owners, who have stepped up to support this new Class and to get it going.  Thanks also to RORC Cowes for putting together a very enjoyable event.

On day one of the event, a fresh breeze of 15-20 knots and sizeable waves provided the fleet of six high performance sub 30ft racing yachts with perfect conditions for a fun filled day of racing consisting of two tight windward leeward courses and a round the buoys race to finish. The conditions tested the skill of all the crews as they screamed downwind on the plane, hitting the angles and grappling with some tricky gybes, but it was the Farr 280 Pandemonium who came out on top for the day with three podium places, including a bullet.

"Keeping the sails pointing at the sky certainly helped our cause!" laughed Pandemonium's Jamie Rankin. "The Farr 280 is very wet but super fast downwind and it was great to race with my sister Frankie. I know the colour scheme on the boat isn't exactly subtle but these boats are really enjoyable and today was the first time out in big breeze with a proper fleet. Ploughing through the waves, you really needed swimming goggles and some of the gybe on gybe action was hard work but just immense fun."

On the second day of racing the rain tried to dampen spirits, but a steady 15-20 knot breeze from the south ensured the crews, once again, had a great day on the water.

Thorkild Juncker’s Open 7.50 Cool Runnings blasted round the racecourse out in front whilst the two Farr 280’s had some good boat-on-boat battles planing downwind and jostling for position at the leeward marks.

Overall, however, it was Malcolm Wootton's Farr30, Pegasus’ day, with two bullets, but Lloyd Thornburg, and Co, took the lead overall, going into the last day, with Cool Runnings and Pandemonium tied in joint second place.

The weather on day three contrasted completely with the first two days, bright sunshine and a weak northerly breeze of 3-4 knots.  The race committee chose to delay proceedings and wait for the westerley to fill in and after two hours of idle floating, setup two windward leeward courses, in reasonable breeze.

With all six HP30’s back on the race track, the boats enjoyed a good start, despite the flooding tide and were pretty even upwind to the first mark, with the Melges 32 and Farr30 rounding in first and second spots respectively.

Downwind, however it was to be Cool Running’s race, with the Open 7.5’s superlight displacement paying dividends on the superficially, extended leg, back against the tide, to take the ‘gun’.

In the last race of the day, Pandemonium ceded their podium spot to Malcolm Wootton and his team onboard Farr30 Pegasus by a mere 2 seconds.  Cool Runnings came in first, to secure their second place spot, but the overall event went win, went to Lloyd Thornburg’s Farr280 - FOMO, who had done enough in the first two days, to fend off Thorkild Juncker and his team.

"It has been seriously good fun ripping downwind today, we wanted to try something different from the MOD 70 and we thought a traditional keel boat might not be exciting enough but this is a real blast" commented Lloyd Thornburg. "FOMO is a bit smaller than our MOD70, but the name stands for Fear Of Missing Out, and we hope to be racing the Farr 280 at lots of regattas this year, especially Cowes Week."

With round 1 of the HP30 Race Circuit now completed, attention turns to the IRC Nationals commencing 24 June where the HP30 Class will again be racing.

For more information please get in touch with joe.hall@activateswitch.com or jochem@boatspeed.info 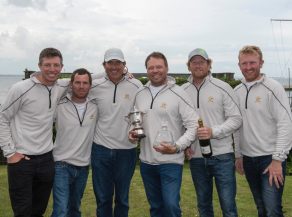