The HP30 Class and Royal Thames Yacht Club are delighted to announce plans for the HP30 Nationals, for the historic Staples Trophy.

The Staples Trophy is a magnificent silver vase, originally presented by His Imperial Majesty, Kaiser Wilhelm II to the winner of the Ocean Race held to mark the opening of the Kiel Canal in 1895; Thames member Sydney F Staples.

In recent years, the trophy has been allocated by the Royal Thames Yacht Club for competitive yacht racing events including the highly successful Farr45 class and now the HP30 Class.

The winner of the HP30 Class National Championship trophy will be awarded this magnificent trophy, with two tickets for the Royal Thames Yacht Club annual prize-giving dinner, in November.

The event is scheduled to start with the skippers briefing and welcome drinks on Thursday 23rd July, with racing scheduled from Friday 24th to Sunday 26th July.

The competition will consist of up to ten races on a number of course formats and lengths. Principle Race Officer Phil Hagen will vary the length of the windward / leeward, triangle / sausage and round the cans courses, over the three day competition, to thoroughly test the characteristics of these boats and crews.

With more than twelve boats pre-entered for this exciting regatta, the 2020 HP30 Class Nationals looks set to be a cracking event. 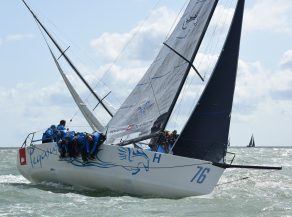