With an action packed 2018 season now behind us the HP30 Class is turning its attention to the next two years of racing, consolidating the continued growth of this exciting fleet of race boats, from all over Europe.

With an action packed 2018 season now behind us the HP30 Class is turning its attention to the next two years of racing, consolidating the continued growth of this exciting fleet of race boats, from all over Europe.

All of the 2018 competitors have agreed to race in 2019 which means that the fleet will start the season in rude health, with ten boats lining up to race at the events.   With five months to go until the start of the new season, there is also plenty of time for new teams to join the programme.

The HP30 Class racing calendar has been created to provide two main competitions over the course of the season, with a national season points championship, and an HP30 Solent Series, running across the whole season.

The HP30 Class Nationals will be staged at Cowes Week where the competition will comprise several days of windward leeward racing, as well as several classic orienteering courses around the Solent.

New Fleets are also developing in Falmouth and Weymouth & Poole.  Watch out for future announcements.

In 2019 the HP30 Class will benefit from their own starts at virtually all events, race for their HP30 National Champion at Lendy Cowes Week and run both a Champions’ Point Series programme and a Solent Points Series programme.

CHAMPIONS PROGRAMME of 5 events, selected from the most prestigious regattas available, with three events intentionally focused between the Round the Island Race and Cowes Week, to attract as many overseas boats as possible to join the fleet.

SOLENT PROGRAMME of 10 events spread across the year, designed to give plenty of racing for the Solent based boats.

Only eligible boats that fit into the HP30 Class limits may enter these programmes and owners must have joined the HP30 Class.  Entries for each event shall be made directly with the organisers of each event, on the official entry forms in accordance each Notice of Race.

The HP30 Class shall monitor entries and results for each event for the overall 2019 Race Circuit, Points Series Championships.  All boats shall have a valid IRC certificate issued by the RORC Rating Office and registration for each event shall be with the OA.

The Low Point System of RRS Appendix A will apply with the following changes:

1.     One race must take place in an event for it to be scored as an Event in a Series

2.     One Event must take place to constitute a Series

3.1   When 4 or fewer events are completed, no score shall be excluded

3.3  When 8 or more events are completed, 2 scores shall be excluded

3.4  When 11 or more events are completed, 3 scores shall be excluded

In the event of a tie in an overall series points score, the result of the final round of that series will be the decider. 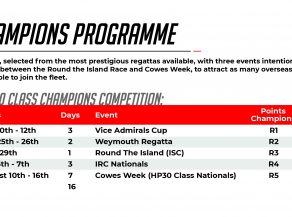