With only six teams racing in the inaugural HP30 Class Regatta, one would think that there should be a degree of disappointment about the fleet size, but the racing on Day 1 has definitely buried that sentiment, after four fantastic windward / leeward races in moderate conditions, inside Plymouth Breakwater, thanks to the Port of Plymouth Sailing Association and the Royal Western Yacht Club.

The competition between the top four boats was fierce, helped by the relatively short upwind leg and three laps of the course, resulting in close elapsed times and plenty of opportunity for every boat to  win.  Podium placings were shared equally amongst the competitors, with the top four spots separated only by 3 points.

With six to eight knots forecast for today and lighter conditions on Sunday, the competition remains  wide open, which is precisely what the fleet is looking for in order to encourage more people to unshackle themselves from the constraints of traditional handicap racing and join this exciting competition format. 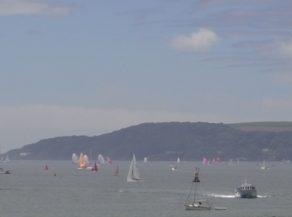