Despite losing the first day of racing to strong winds, Sunday delivered two close races for the four of six boats entered.

In race 1, Jamie Rankin on Farr 280 Pandemonium sailed a clean race and the correct course, winning by some margin. In race 2, Pegasus got back into their stride, picking up a bullet, closely followed by Tim Cunliffe's, Cornish Farr30 Insatiable.

"As our shake-down event for the season, it was great to line-up with the opposition and see where we stand." commented Tim. "We had to re-thread a new system on the mainsheet track, right at the start of the first race, and were lucky to come second in that one, but in the second race, we sailed consistently and were happy with the result, finishing just behind Pegasus, but picking up first for the weekend."

As a taste of things to come, the racing in HP30 this weekend was brilliant with four out of five boats securing podium spots.

The next event in the HP30 calendar is Round 1 of the Champions Programme at the RORC Vice Admiral's Cup. With eight boats scheduled to race, this will be the start of a very challenging and competitive race season. 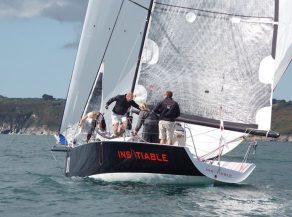